What To Look For In A Laser

The comparison between a red and green laser sight is actually fairly simple. Red lasers require a lot less power to use and are usually easy enough to see, except in bright situations. Green lasers take up a lot more power, but are visible even in full daylight. So if you’re choosing between green and red lasers, just ask yourself if you need daylight visibility.

If the answer is yes, then get a green one. If the answer is no, then look closer at the red lasers. If it doesn’t matter, then it also doesn’t matter whether you choose a red or green laser, except when you’re talking about battery life. Not shockingly, a bright laser sight uses more battery than one that is less bright.

Some of the best AR-15 lasers come with an LED tactical light along with it. These laser lights are more versatile than laser sights without a tactical light. Here’s the main thing to consider when looking at a good laser sight that has an LED light with it: the human eye. If your intended usage for the laser sight can benefit from stealth, then a light is probably not a great idea. 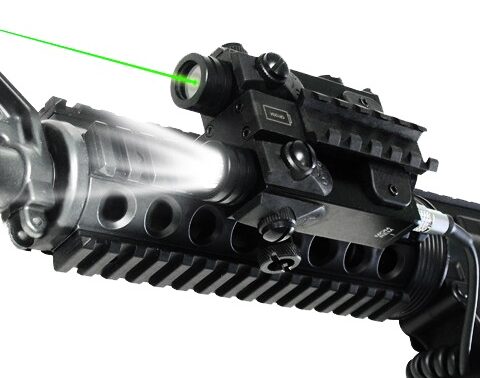 Sure, the laser is visible as well, but a single bright dot is a lot more subtle than a 1000 lumen LED flashlight in strobe light mode. Of course, you can always use the laser sight without turning on the light, but you’ll want to double check how the settings are changed on the unit and in what order.

This applies to both the laser sight and the light (if it has one). Most of the AR laser sights that we are recommending push the legal limit of brightness, which is 5mW, but some of them go as low as 1mW. The brightness settings will determine if you can use the same laser for short range shots as well as long range shots.

As mentioned above, a red beam is going to usually be a less bright model than an AR-15 laser sight that uses the color green instead.

For a home defense weapon, red lasers can work just as well as green lasers because it’s in low light and at close range. If you’re using it for night hunting or as a tactical weapon for SHTF scenarios, then green lasers or an infrared laser is usually the way to go, in my opinion.

If you’re taking it outside, you also want to make sure it can handle extreme weather. The last thing you want is for your laser sight that you’re relying on to stop working in the middle of your hunt or operation. The best laser sights are tough enough to handle most conditions, even if they’re not made out of metal.